December happened so FAST. I think having Thanksgiving occur so “early” here throws off my internal calendar. It’s as though I’m still waiting for Turkey Day, so when December 1st rolls around, I’m rather surprised.

November was such a crazytown month; I’d like December to be more kind. That’s hilarious, given what happens in December, the tiny little holiday that, like items in your basement, tries to take over every single centimetre of available space in your house, your calendar, and your brain. It’s sort of like the zombie holiday: It started out all lively, and full of good things, and then something killed it, and now it’s terrorizing us, stalking us, trying to eat our brainnnnnnzzzzzz…

Of course, it wasn’t “something” that killed the winter holidays, it was greed. Greed made Christmas into An Industry, and that’s a surefire way to steal something’s soul and turn it into a dead thing relentless in its quest for moremoremore.

Ooooo. Did I just do a mini-rant? I did. Whoopsie.

In self-defense…I think I’m going to try and make a Schedule. Now, I know Steph does this, or rather, has someone do it for her; and it works out rather well for her holiday tasks. I don’t have a talented scheduler pal, or if I do, they are even now entering the Witness Protection Program so as to avoid a phone call from me asking for help. So I shall attempt this on my own. Stay tuned. (You may hear screams of terror and agony from the direction of southeast Canada, but please don’t give those a second thought. Just part of the process.)

I finished the first woven scarf on my Cricket and am now several inches into the second one. It goes so quickly! Or at least, it would go quickly, if I could persuade the cats that the loom is not a Box. They keep trying to crawl inside it while I am weaving. They paw at the warp (grrrr) and duck their heads down under the warp, put a paw inside and try to get right on in. It would be cute if I weren’t trying to protect all 108 sock-yarn ends from being burst apart by the intrusion of a twelve-pound cat belly.

I know. It looks just like the first one.

Nicholas started a baby hat for a co-worker last night. Or rather: I started it for him, as casting on is still a bit of a battle for him. So I did that part, and got the first couple fiddly rounds out of the way, and then he took over. It’s the Berry Hat, and he chose to do it in purple and green, because he really liked the sample in the photo. It’s acrylic (the new mama is both a first-time mama and a graduate student, so Something Washable was key), and already a couple of inches on its way towards being A Real Hat. (I may have knitted more than just a couple of rounds. I may have knitted about half of this. Shhhh…I won’t tell if you don’t.) 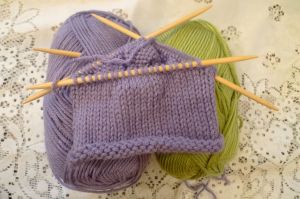 It being the time of giving and all…

I give thanks for the good hearts at Best Friends Animal Sanctuary in Utah. If I had a million dollars, I’d make sure these shining souls got a chunk of it for their work with homeless, abandoned, and abused critters. 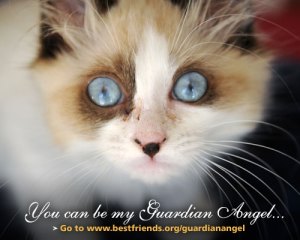 Next time: I may have cleaned part of my studio.

2 Responses to first of december