A friend of mine called me this morning. I picked up the phone and squeaked “Hullo?” into the mouthpiece. A moment’s silence. Then she says: “Oh. That is so not good. You sound terrible. Why don’t you just nod REALLY loudly for yes and shake your head REALLY loudly for no, OK?”

Apparently, I sound like a mousefrog, squeaky and croaky at the same time. Sqwee-oak! (I’m sure my singing voice is currently quite amusing as well. Let’s not find out, shall we?)

I have that eerie, unreal feeling one gets when one has been up since 4 AM, hitting the cough drops and hot tea and coughing one’s lungs out and then napping and then waking up to do it all over again. Our house is strangely silent, because, as you might be surprised to learn, I am the main source of chatter here. (I know. Such a shocking revelation. You’d never have guessed, right?)

Yesterday, I finished weaving the fabric for the pick-up tote bag; today, I cut it off the loom!

36″ of lovely, firmly woven cotton fabric. This is going to make a fine tote, methinks. Now all I have to do is get to work on finishing the straps!

I’ve done a lot of weaving, but somehow, this plain weave piece with the simple stripes makes me extraordinarily happy.

Maybe it’s something about the warp-faced weave that pleases me, because in all my weaving, I’d never done a warp-faced piece before. It’s just got a lovely feel to it, smooth and strong, with some body and weight. I think it’s perfect for a tote bag, and maybe that’s what is so pleasing about it: It’s perfect for what it is intended for.

A late-night trip to Michael’s unexpectedly resulted in buttons for the Baby Surprise Jacket:

I really did not have high hopes walking into Michael’s, because our store is in a constant state of rearrangement depending on what holiday is six months away and how close it is to Wedding Season. I wanted something colourful and funky and indestructible; I also wanted something on the large side to help the poor frazzled mum dress the youngster. (Those tiny teensy buttons on baby things are a PAIN to use when one’s Tiny Person is wiggling and wobbling all over the changing table.)

as usual, you can click any photo to embiggen it

I kind of like them. They’re plastic and thus washable. They’re funky and colourful and playful. I stitched them on with handspun silk thread, for reasons known only to the voices inside my head.

A bit of blocking and it will be ready for delivering to Baby Ben and his parents.

I’m already choosing roving to spin yarn for another one of these. And that is saying something, as I never, ever, EVER knit the same pattern more than once. But the Baby Surprise Jacket is enchanting and clever, and I think it will look smashing in handspun.

What the Malabrigo is Becoming

The Malabrigo yarn that Zoe, uh, blessed with her unique cat sense of order, is becoming a Damson after all.

I’ve only got half the skein untangled. But after four nights of untangling, the yarn just broke in my hands (due to Zoe’s teeth, perhaps?) and I declared half a ball enough to be getting on with. I looked at a bunch of patterns, and then Nicholas and I had to take a bit of a car drive for some errand or another, and I threw a random pattern into the yarn bag with some needles, and lo, it was the pattern for Damson. It was meant to be.

I am entranced by the subtle shading and jewel-like tones in this yarn (the photo above is pretty darn accurate, colour-wise). It’s a great choice for a garter stitch or stockinette shawl, because the yarn gets to show off all its subtle mysteries when there is nothing else going on. Love, love, love.

Now all I have to do is face the second half of the tangle.

I must say, however, that several of you suggested Rosemary Hill’s 7 Small Shawls booklet. I have had my eye on that collection of pretties for months, now; I am a HUGE Romi fan. I haven’t bought the booklet yet, mainly because…uh…well, there was this big, hairy OGRE…OK, I got nuthin’. I haven’t got a single good reason why I haven’t bought it yet. I’ll finish the Damson and then I might have to make Maia.

Poking Around In The Stash

I spent a happy hour or so upstairs poking around in my stash, looking for goodies for the Giveaway Llama and the Deep Winter Fairy to send off. This is having an unexpected side benefit: I’m kind of organizing things as I poke around.

Let’s not get TOO excited about this, OK. Really. Don’t go sending in ideas for IKEA storage yet or nuthin. I mean, I’m just sort of tossing things into bins so that one bin has sock yarn and one bin has fibre and there aren’t bins that say “RANDOM SHIT” on them anymore (nor bins that ought to say Random Shit and instead say, oh, I don’t know…”Pappers” on them).

And I’m kind of getting a clue here that I can’t just move things from one box or bin to another. This time, some Decisions must be made. There has to be some culling of the boxen herd and whatever pappers might lie within. My yarn stash isn’t too bad at the moment as I did a huge amount of culling before moving to Canada. (Something about not wanting to write on the customs forms “eleventy billion boxes of yarn, purple, silk/merino/wool/alpaca; nine zillion boxes of yarn, green, for socks.” I couldn’t face that, especially when I found out how many damn copies of that paperwork had to be made. Everyone in Ontario must have a copy of my moving box inventory by now.)

So: Decisions. It’s like letting go of old clothes, realizing that they don’t fit, no matter how much you once loved them, and if they don’t fit, they can’t just sit there forever, and no, it isn’t likely that you will ever wear a size 8 ever again, no matter how much weight you lose (some things are just Not Meant To Be, and Sandi as a Size 8 is one of Those Things).

It’s like designing a life. What kinds of things do I want to have in my studio of the future? Interesting question. Thinky-thinky-thoughts… 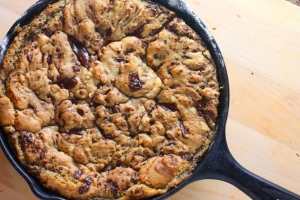 I am going to sneak into the kitchen while Nicholas is upstairs playing guitar and see if I can make one of these right after I hit “Publish” on this entry.

Another Sandy and her mission to release 1000 paper cranes into the wild. Just because. Each crane is hand-folded by Sandy, and has a single positive word written on it (the one below has “Legendary.”) She leaves them in random locations as she goes about her life. Each crane is photographed and blogged; if you find one of her cranes, you can contact her if you like.

Sandy has inspired other people from as far away as Norway and Mexico to also release a few happy cranes into our world. 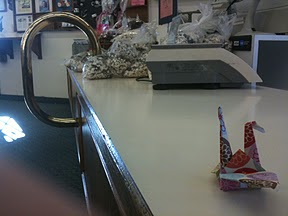 A little bit of folded wonder, coming to us from Sandy in New Jersey. Thank you, Sandy.

And A Random Weird

Because really, I simply had to share this: Steampunk Sarah Palin Comic Book & Pin-Ups. (Pin-ups? PIN-UPS?)

Lock up your children, folks.

12 Responses to squeakily yours