I’d like to wish my sister Liz a Happy Birthday. Lizzie, don’t believe anyone when they tell you how old you are now. Just pull up a walker beside me and have some tea. They’re all just too young to count properly.

And no, your sweater isn’t finished yet.

Yup, see? It’s still me. Not a Pod Sandi, the real thing.

It’s TdF Day 4, and there have been no idle hands in this spinner’s house.

Ahem. Those are butterflies. (Work with me here.)

Not All Yarns Are Created Equal

This may be obvious to yarn folks; however, I know that some of you are not spinners, nor are you knitters. You’re clearly here for the witty commentary and insightful dialogue (coughcough).

I’ve been concentrating on two things the past year or so, in my spinning life anyway: Colour blending, and Yarn With A Purpose. What both of these have in common is Intent: I have a vision of what I want in my head, and I choose my materials and methods according to which ones I think will get me the yarn I want.

Spinners don’t always do this. Many of us spin for meditation, for pleasure, for relaxation, for a sense of connectedness that is profound at times, yet difficult to explain to a non-spinner.

Much of the time, our purpose in spinning has little to do with the specific yarn we are making and everything to do with the fact that Making Yarn is in and of itself a worthy use of one’s time.

The yarn we spin when we turn off our brains and just let our fingers do what they do best is referred to as our “default yarn.”

Nearly every spinner has a default yarn; some default to a worsted method, where the fibres are controlled, and all march into the twist in neatly organized parallel lines. Others default to a woollen method, where one lets the twist run up into the fibre supply, grab whatever it wants to grab and toss it around, no matter which way the fibre is oriented. The first is generally smooth and tightly twisted; the second is generally fluffy and less tightly twisted. (Huge Sweeping Generalizations.)

My default yarn, spun from silver-speckled roving from Holiday Yarns

My default yarn is a semi-worsted, combining bits of both techniques; thus, the results are somewhere between extremes. It’s great yarn, but if I used that technique for every yarn then all my knitting would start to look and feel the same.

For the TdF project, I envisioned a somewhat fluffy, tweedy, heathered yarn, medium weight, possibly 3-ply. To get this yarn, I had to decide what sort of fibre would work best, how to prepare it, and then how to spin it so I would end up with what I wanted.

That’s the spinner’s version of “you never know what you’re going to get until you try it.” Just because I’ve been spinning for twenty years, and working with yarn all my life doesn’t mean I magically know how to make a heathery, fluffy yarn with what I have on hand. I can’t just grab some random fibre and go, and expect to hit the mark on the first spin. I have to sample. I have to try different things until I find out what works.

Because it depends. Fibres can feel soft in the hand, but end up prickly in the yarn. That grey might be lovely, but when paired with certain colours, it might look more brown.

This is not chemistry,  where precise instructions give you a reliable result. This is the land of Sometimes, and the city of Some People Do Go Both Ways. So I have to be willing to make mistakes, to take roads that may turn out to be dead ends, even to get lost along the way.

Oh, and “four pounds” is a semi-serious answer to spinners who ask How Much Fibre Do I Need To Spin A Sweater. Well, it depends. Are you a size 30″ chest or a size 50″? Are you going to spin thin yarn or thick? It is a long-sleeve sweater with cables, or a lace sweater with cap sleeves? See? It Depends. AND: Four pounds will most likely be enough for most people to spin 1 sweater. (Actually, for most folks, it may be enough for 2 sweaters.)

In my head, I can see The Perfect Colour: grey-brown-green, mostly grey; heathery, tweedy, interesting to the eye. I picked the Romney fleece because my friends love it, even though I’ve never worked with it before. It was also a great base colour. I then went and found all the green stuff I had. Then I spent three days making sample batts with varying proportions of Romney Grey to greens. 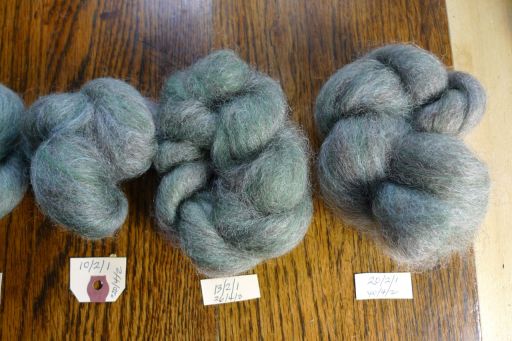 I like that last one best–at least I like it as it appears in its fuzzy batt form. But I am not making a batt sweater; I am making a yarn sweater. Sooooo…I have to make some sample yarn out of the best sample batt to see what I get.

My one concern throughout the batt sampling process is that the Romney is a bit coarser than the fibres I normally work with; in batt form, it feels a bit scratchy. I don’t like scratchy. I wonder if perhaps I overwashed it, stripping it of its last bit of protective lanolin, and thus drying it out. While sorting and weighing it, I used gobs of lanolin on my hands, hoping this would transfer to the fibre. I also used my own version of combing milk, spraying it on the fibre before carding. Even so…scratchy.

Last night, I sat down with Batt Number Six and spun it all up, varying my technique every few yards and then looking at the results. I made thin yarn, thick yarn, worsted, woollen, long draw, short draw, spun from the fold, from the end, the whole enchilada. This morning, I chain-plied it, soaked it, agitated it a bit to do a smattering of fulling, whacked it, and it’s now hanging to dry. 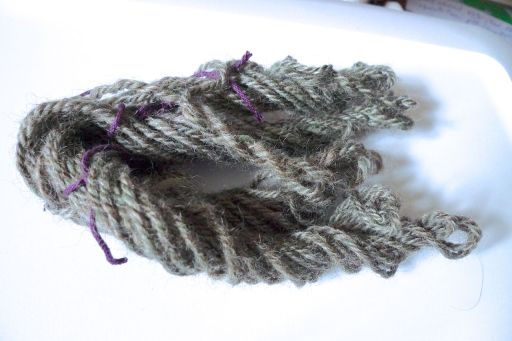 Sample yarn, before washing and whacking

(Yes, I whack my yarn. For you non-spinners: Whacking means whacking. Hold skein by one end, thwack yarn on counter or other hard object, children and spouses being out-of-bounds. This helps the yarn open up, be fluffier, and evens out the twist. It also helps the spinner resolve Certain Emotions if things are not going her way.)

It’s wet, so I can’t say what the final result will be. But: It still feels scratchy. This does not bode well. I’m becoming convinced that it isn’t my techniques, it’s the Romney itself. Maybe this isn’t sweater yarn; maybe it’s something-else yarn.

I shall have to sit in the Thinking Chair and have a think about this for a bit.

World’s Oldest Recording Resurrected. Golly there are some smart people out there.

In honour of Pride month, some unicorn bandages, which I believe were a one-off and are not really for sale. I just report the news, folks.

Oddest visual-as-clue packaging ever. There are no words.

Did you know that the San Francisco Fire Department uses hand-built ladders custom-made for them? Wow.