Actually, by the time I hit Publish, it will be nearly time to wish everyone a Happy Summer Solstice. However, most of the original draft of this was written in April. At least I keep life interesting for y’all.

I am wearing a sleeveless short cotton dress. My windows are open. My toes are 93% thawed out. The patches of sunshine on my wood floors are sprouting cats all over the place.

Not to mention that there seems to be a BEN in my Green Knitting Chair, located in the perfect Sunny Spot in my living room.

“MINE.” says 2-year-old Ben. Like every toddler the world over, Ben has quickly mastered the two most important words in a youngster’s small-but-mighty vocabulary: “Mine!” and “No!”

Winter, I am not a bit sad to bid thee farewell.

Catching up with Sandi’s Needles

It has been a long, long, LONG time since I did a basic knitterly sort of post. (About a year, actually. A Life-Ate-My-Brain kind of year.) How about some stitches? 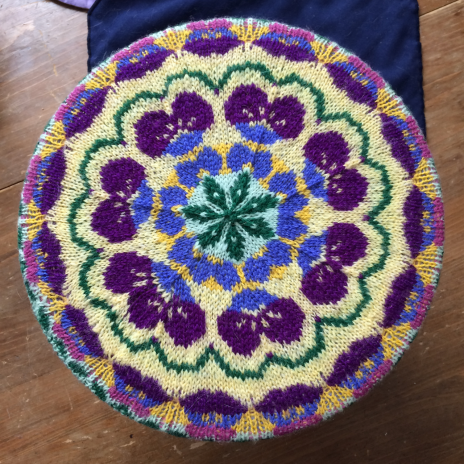 My own, uh, rather… whimsical… interpretation of the Pansy Garden Tam. (Photo credit: Me, April 2018.)

If you click on the link there, it will take you to Ms. Ritchie’s pattern page on Ravelry, where you can see beautiful photos of the Tam the way it was intended to appear, like this one:

A few short moments of contemplation and comparison of the images above might cause you to notice some rather unusual features in my version. (Who says round tams have to have perfect radial symmetry at the top? Who says all the flowers in a given band must match one another? Pish-posh.)

I feel compelled to point out that you will not find instructions for the mismatched, non-symmetrical motifs found in my hat anywhere, not on my site and especially not on Mrs. Knitter’s site. Ms. Ritchie’s original design is flawless in symmetry, balance, and consistency of motif.

In other words: It isn’t her fault I cannot count stitches in 8 groups of 12. It’s not her fault I chose to go stitch-marker commando on this project. As little fuzzbutt Ben would say: “MINE. ALLLLLL MINE.”

I FINISHED A PROJECT. It’s done and it’s wearable and it actually has, in fact, been worn at least once outside of the house. So I feel justified in saying: I may be just a wee bit proud of myself for actually finishing something, after so many many months of barely being able to START something, let alone persevere to the finish line. And the Pansy Garden Tam is not just any old garter stitch toque: Seven colours! Two-handed stranded! Tiny needles!

As we used to say when Ravelry was younger, “I haz a proud.”

It’s stranded colour work, not true Fair Isle, in that it has no peeries (tiny repeated designs used in traditional Fair Isle colourwork), floats are frequently carried over more than four/five stitches, and its motifs are more representational than is usual with traditional Fair Isle. However, the smallish motifs and two-colours-per-round give the stitching the rocking, soothing effect that is one of the true pleasures of stranded knitting.

The pattern calls for using corrugated ribbing in the “brim”, and it was my first time trying out this pretty method. Despite the rather tricksy-sounding name, I found that it is a stitch pattern without tricks of any kind. Corrugated ribbing is nothing more than combining a [k2, p2] rib pattern with 2×2 columns of colour work [2 purple, 2 yellow] all the way around.

For some reason, no mutant flowers were found on the underside of the hat upon completion.

Now, if you are a bit wobbly in your colourwork skills, you might be a little hesitant to incorporate purling into your colourwork toolset. Don’t be, really. Once you’ve hit the third or fourth stitch repeat, you forget you are doing anything with a special name and a fiddly reputation. It’s just knitting, and every knitter can handle anything that is “just knitting”, right? (The correct response is, “RIGHT!”)

My only advice in terms of purling and colourwork is this: Make sure your floats stay on the INSIDE of the project. (Voice of experience, obviously. I think I lost ten rows to that single mistake the first time through.)

Two more tips:
1.  Use markers,  at least one per repeat. Now is not the time to “go commando” and leave your pretty markers in their tins.
2.  If you are in the middle somewhere and discover that you have too few or too many stitches, look VERY carefully at your repeats and the solid colouring between the flowers, as these are the most likely spots for stitches to appear and disappear without permission.
3.  In fact, as you proceed through the pattern, please do make your increases/decreases there, between the motifs of the previous rounds, as best as you can. TRY VERY HARD to not make changes in the midst of the motifs themselves. Doing so may result in an unwelcome increase in Mutant Motifs.

Of course, I would never actually do such a thing myself. Of course not.

A final note on Finishing: My cast-on was much too loosey-goosey; the bright fuchsia edging was thus extremely ripple-y and ruffle-y. (Technical terms, of course.) I just could not bring myself to rip back after I finished the lovely ribbing, so I let it be as I knit the hat, letting the Girls in the Basement† work on the problem.

My solution: After I had woven in six thousand ends (yes, yes; I am aware the instructions say to just tie knots and leave short ends which will full themselves into submission during blocking; I am also aware that this leaving-the-ends-alone is a traditional method used by knitters far more experienced than I. However, I am the Wilde & Fearless Childe of knitting, am I not? So I put on a very absorbing audiobook (Aliens! Hideous Monsters! Dark corners of an ancient pyramid under the Antarctic! Mysterious tones producing instantaneous mutations horrible to behold! Scientists too stupid to compete with one-celled organisms, and too clueless to believe the alien in front of their faces!  Scientists who are killed off one at a time in manners too gruesome to imagine! You know, the best that modern literature has to offer.) and wove in ends for an hour or so.

Once that was done and two-thirds of the scientists had been eaten, I threaded my yarn needle with the fuchsia yarn, and carefully folded the edge of the edging underneath and stitched it into place. This made a firmer, as well as neater, edge. Yay!

As mentioned in previous posts, I bought this in kit form, mainly because there were 7 colours and I am not (yet) totally confident in choosing my own colours for this sort of pattern. The colours in the kit were gorgeous, however, so I was quite content to trust the designer and (attempt to) just do as I was told (for a change!). The main colours are a sunny summer’s yellow and a spring’s dark deep pansy purple; contrasting colours include a mint green, an emerald green, a deep fuchsia, a navy blue, and a yellow-so-pale it seems almost white. (FWIW, The colours in the second photo above are more true-to-life.)

You can buy a downloadable PDF of the pattern here on Ravelry. If you would like to order a kit, or perhaps even a yarn pack of the colours, hop on over to Ms. Ritchies’ website, Mrs. Knitter Designs. Kits and yarn packs for the Pansy Garden Tam are available here. 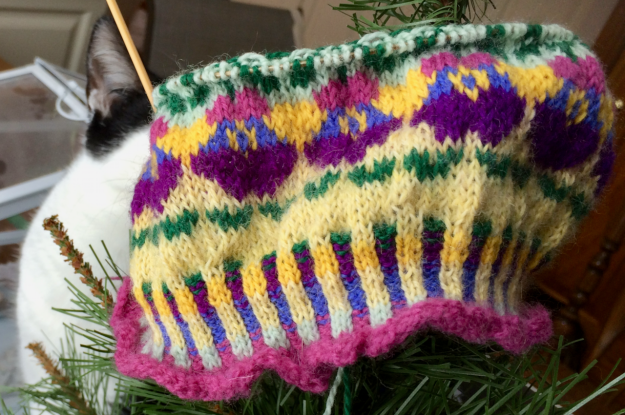 Tessa admires the beautiful yarn and tasty wooden needles used in this project. Also, see the ribbing? Corrugated, it is.

† Girls in the Basement: Creative folks of all types often talk about setting aside a troublesome project for a while in order to give one’s subconscious time to figure out possible solutions. Stephen King, in his book On Writing, and also in his novel Bag of Bones, describes this process as “letting the boys in the basement move the furniture around for a bit”. Me being me, I have girls in my own basement, pushing tables, chairs, sofas, and spinning wheels from one corner to the other, working out how everything fits together, getting back to me with an answer while the Rest of Me edits and tweaks and twonks the text of whatever it is I am writing.

4 Responses to A Finished Object Doth Bloom in Spring