When I designed the Comfort Shawl, I had no idea how popular it would become. I also did not realize the wide variety of skillsets out there in Knitting Land. Since the “tab start” method of shawl knitting is so common, I thought it would be easy for folks to work. For whatever reason, the neckband instructions on the original Comfort Shawl instructions from Interweave’s Knitting Daily have completely confused many knitters.

If you want a closer look, you can click on each photo to see a larger version.

Once you cast on and work the set-up row, the instructions ask you to work another 52 rows in pattern. You end up with a long strip, like this:

Neck strip with Row 52 at top.

A close-up of the end of the strip, WS facing, with Row 52 at top. The orange marker is at the beginning of Row 52. Working yarn is at the left, as I have just completed this row.

Note the large “chain stitches” along the long edges of the strip. 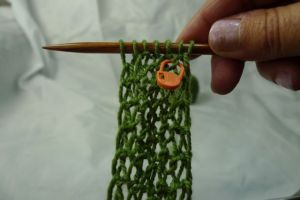 Next, the instructions tell you to rotate the strip so that the lengthwise edge is at the top. Here’s a photo after the strip has been rotated.

The edge where you will pick up stitches is the one with the chain stitches at the top in this photo. You’re going “around the corner,” so to speak.

I place a marker after the end of Row 52; then start to pick up stitches along the lengthwise edge–one stitch in each chain stitch along the edge. 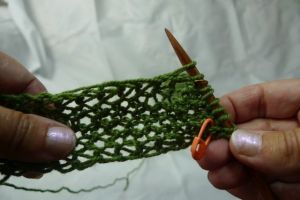 After the first two stitches have been picked up along the lengthwise edge. 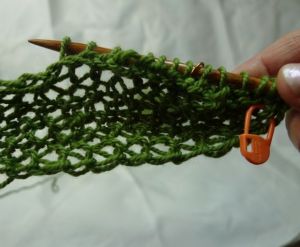 After 8 sts have been picked up.

Here’s a photo of the strip after all 26 sts have been picked up along that edge.

Now it’s time to rotate the strip again so the cast-on row is ready to be worked on.

See the orange marker? That’s still the beginning of Row 52, now at the bottom. The lengthwise edge with 26 picked-up sts is at right, and the cast-on edge is at the top.

This is what it will look like when you have worked the sts of the cast-on row. The WS is facing you.

Here’s the piece after all 40 sts are worked, with WS still facing you.

Turn your work as usual. Now you have the RS facing, and are ready to proceed with the rest of the instructions. 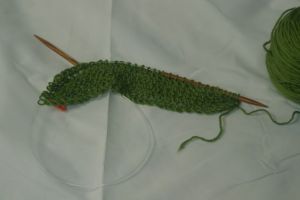 I hope this helps!

I know that there have been requests for an update of the pattern, explaining some of the tricky bits. I’m working on it!